World of Warcraft’s seventh expansion, Battle for Azeroth, launches later today. I’m excited, but I’m also feeling a bit retrospective and even sad. This marks the end of Legion, the previous expansion, which became one of my favorite times in the 14-year-old online multiplayer role-playing game’s history.

Legion came out on August 30, 2016. Every fan knew that it would be a crucial expansion. Its predecessor, Warlords of Draenor, was a miss. Its convoluted story involved time travel and alternate dimensions, and its endgame content felt sparse, with few raids and dungeons that didn’t give enough rewards. Warlords of Draenor also put a large emphasis on a new Garrison system, which had you creating and maintaining your own base. But you had little room to customize your Garrison, and the new digs also separated you from the rest of the world. Visiting players were infrequent at best. World of Warcraft is a multiplayer game, so having a major system focus so much on isolation felt off. 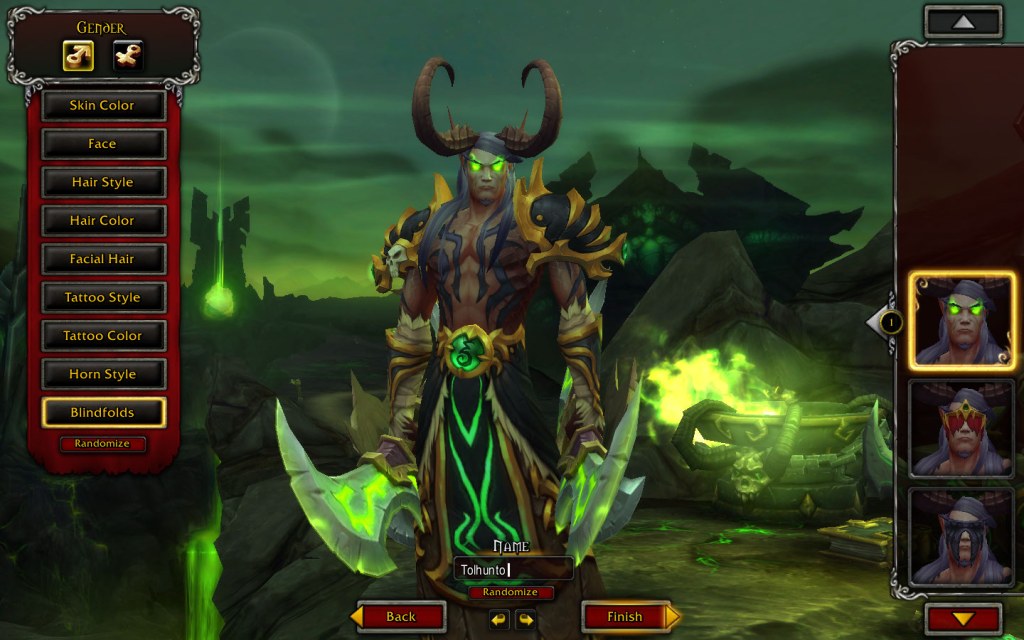 Above: The Demon Hunter.

So much to do that’s new

Even on its first day, Legion offered more than Draenor did. As usual, you had the new leveling zones. We also got a new class for the first time since 2012’s Mists of Pandaria introduced the Monk, as Legion added the Demon Hunter, an agile fighter that stands out with its focus on mobility. It’s also a easy class to play, making it a great starting point for newer players.

But Legion’s greatest contribution came with its new Mythic+ system. Dungeons have always been a part of World of Warcraft, but Blizzard has struggled to find a way to keep them relevant during the long lifecycle of an expansion. This issue was another sore point in Warlords of Draenor. Its dungeons became useless once you started doing raid content, as the dungeon rewards couldn’t compete.

Mythic+ keeps dungeons challenging and rewarding. They’re harder versions of standard runs that give better items, but they’re also flexible. Players earn Keystones that can increase the difficulty of Mythic+ dungeons even further. This also gives you even better gear if you beat them. And if you win, you get a new Keystone that unlocks an even harder Mythic+ dungeon. You could keep trying more difficult content and earning rewards. The system is a test of skill that also gives players an alternative way to earn powerful gear aside from raiding. 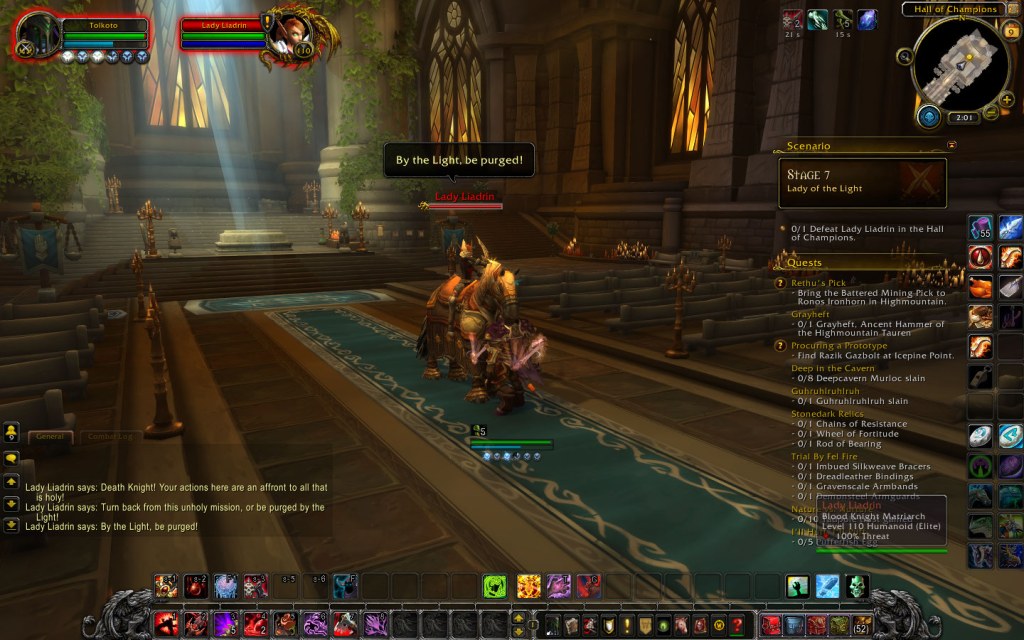 Above: The Paladin class hall.

World of Warcraft’s story usually focuses on its two factions: the Horde and the Alliance. While some of that conflict was a part of Legion’s early plot, the player’s journey instead focused on their class identity. Each of World of Warcraft’s 12 classes had their own Order Hall. These locations served as your hub. Each one had a look tailored to the fantasy of each class. Hunters took up home at True Shot Lodge, a gorgeous cabin at the peak of a mountain. Paladin’s holed up in the Sanctum of Light, a hideout underneath a church. Each class also got unique quests and story content, along with class-specific rewards.

I loved this emphasis on class fantasy. In Legion, being a Hunter didn’t just define your abilities. It gave your experience a specific aesthetic. The Order Halls also served as an evolution of the Garrison idea. Like with your Garrisons in Warlords of Draenor, you can send out followers on quests. Then, after a certain amount of time (usually hours), you get a reward. It’s not a super interactive system, but it does give you an excuse to keep logging back into the game. In Draenor, the system was overbearing, but Blizzard scaled it back a bit in Legion. It felt more manageable and less all-consuming.

Most important, you can see other players in the Class Hall. Unlike with Garrisons, they didn’t feel like isolated prisons. 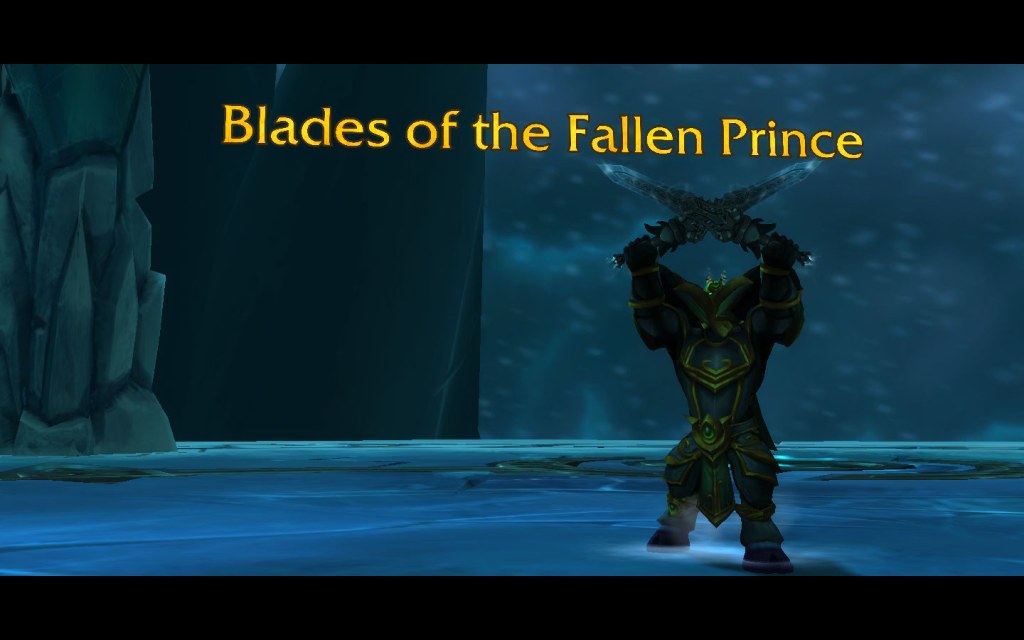 Above: Getting your Artifact Weapon.

It didn’t all work

Legion did have some new ideas that weren’t as successful as Order Halls or Mythic+. Each specialization of every class had its own Artifact Weapon. You would get this weapon at the start and use it throughout the expansion. You could increase the power of your Artifact Weapon by obtaining Artifact Power and Relics through quests, dungeons, and raids. It was nice to have a new sense of progression beyond leveling, and these weapons further expanded on class fantasy with backstories and designs. But you also felt tied down to your Artifact Weapon, and farming the large amounts of Artifact Power needed to increase its strength could feel like a chore.

Legion also introduced a new Legendary Gear system. After finishing certain goals, such as beating a boss or doing enough World Quests, you had a chance to earn a Legendary item. These were the most powerful trinkets, rings, and armor you could find. They were so strong, that not being lucky enough to get one put you at a severe disadvantage against other players. Worse, you would earn a random Legendary item when you finally got one. Legion had a huge discrepancy in between the best and worst Legendary items. If you got one of the weaker ones, it turned a moment that should be exciting into one of disappointment. The system left too much of your progression up to chance.

I also didn’t like the sci-fi direction some of the expansion took. The Burning Legion is an army of demons, but this expansion made them something of a space force. The final major patch, 7.3, added a lot of content, but the final raid it brought leaned too heavily on spaceships, lasers, and other ideas that feel out of place in World of Warcraft’s magic-and-knights fantasy world. World of Warcraft has always been a hodgepodge of ideas, mixing in traditional fantasy races like orcs and trolls with Lovecraftian tentacle monsters and Chinese mythology. But spaceships are a step too far. 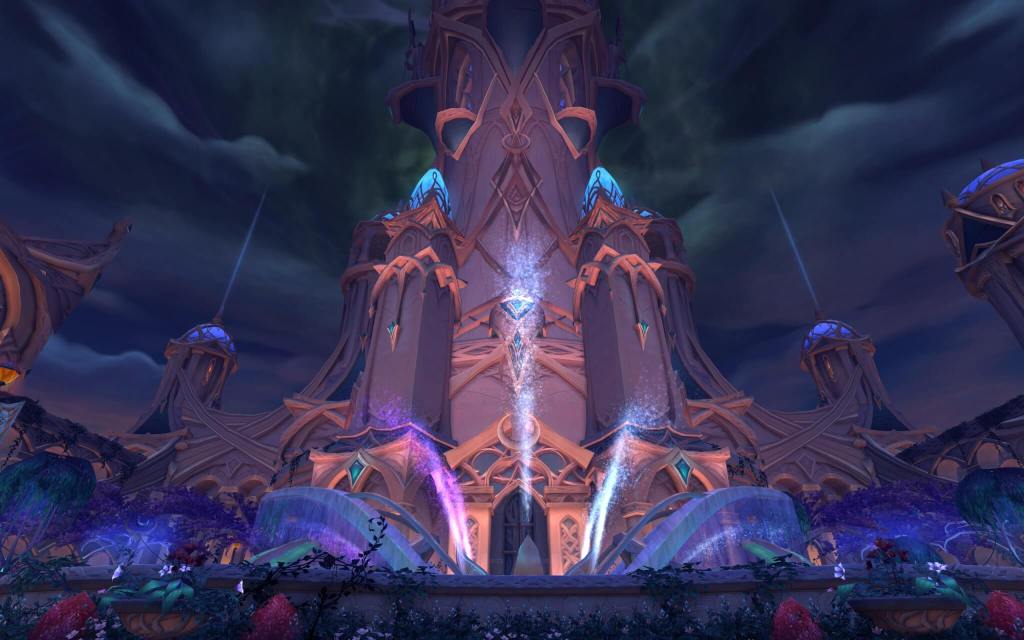 But overall, Legion was one of World of Warcraft’s best expansions. It started off with a lot of new content, frequent patches gave a steady stream of things to do, and the Mythic+ system made dungeons a key part of the experience.

Battle for Azeroth has a lot to live up to. It is bringing back some of Legion’s innovations, including the Mythic+ dungeons. Artifact Weapons are gone, although we have a new necklace that will serve a similar function (it’s a piece of gear you keep the entire expansion, and you’ll farm resources for to make it stronger). It’s also adding new ideas, including new three-player content, Island Expeditions.

And for the first time, the Alliance and Horde will have different leveling quests and locations.

It’s a lot to be excited about. Maybe Battle for Azeroth could be another excellent expansion. But if it succeeds, it will owe a lot to Legion.