UP Bondy: France’s World Cup star Kylian Mbappe was feted as a conquering hero on Wednesday when he returned to Bondy, the Parisian suburb where his fairytale footballing career began.

Thousands of residents turned out to greet the Paris Saint-Germain striker, back in Bondy on the outskirts of the French capital for the first time since picking up the World Cup best young player award in Russia. 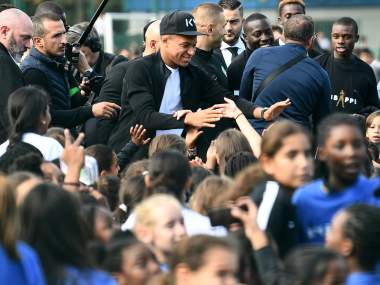 After Pele, he became only the second teenager to score in the final as France beat Croatia 4-2 on a heady night in Moscow.

“Kyyyyliaannn! Welcome home” shouted one fan, to which a visibly moved Mbappe replied: “I am happier than you (to be here).

“It’s a privilege to return here amongst you, in my home, here in Bondy.

“It’s the most beautiful present,” he told the crowd packed in to the very ground of Leo Legrange where he first kicked a ball in anger back in 2004 as a youth player for AS Bondy.

Among those on hand to greet the world’s second most expensive player of all time was Caroline, 28, who spent the time waiting for his appearance breastfeeding her baby.

Loufti, 14, said: “He’s an idol, it warms our hearts that he’s still thinking about us, it’s our dream to end up like him.”

Mbappe, who last week made the front cover of Time magazine, talked to kids kitted out in the French colours with the name of their local hero emblazoned on their backs.

“We’ve just seen him in person, I’m not going to wash my hands for weeks!” said one star-struck youngster, Fatoumata, aged 10.

“This is the biggest event” in our town’s history, said Bondy mayor Sylvine Thomassin.

Before taking his leave Mbappe told his youthful audience: “Believe in your dreams, I hope one day one of you will be standing here and I’ll come to acclaim you.”