All 157 people aboard an Ethiopian Airlines plane have been killed after it crashed minutes after take-off.

The state-owned carrier has confirmed there were no survivors from Flight ET 302, carrying 149 passengers from 35 countries and eight crew members.

Seven Britons and an Irish citizen are among the dead, the authorities have confirmed. 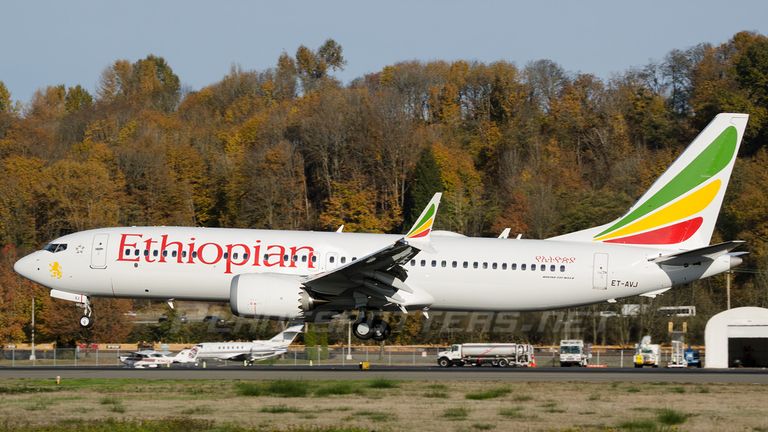 Other victims included 32 Kenyans and nine Ethiopians, 18 Canadians, eight each from China, the US and Italy, seven from France, six from Egypt and five from Germany.

Slovakian MP Anton Hrnko said on Facebook that his wife and two children were among those killed.

The Nairobi-bound flight was likely to be have been carrying people heading for a major United Nations environmental conference in the Kenyan capital.

The Boeing 737-8 MAX was on a regular scheduled flight from the Ethiopian capital Addis Ababa when it came down shortly after take-off near the town of Bishoftu, some 31 miles (50km) to the southeast.

The jet left the airport at 8.38am local time before losing contact with the control tower at 8:44am. The airline’s chief executive Tewolde GebreMariam said the pilot, who had an “excellent flying record”, reported difficulties and had been cleared to turn back.

The plane “had an unstable vertical speed” after take-off, according to the flight tracking website Flightradar24.

In a video message posted on Twitter, British ambassador to Ethiopia and Djibouti Alastair McPhail said he and his team have been working hard in response to the “tragic crash”, and are in “close contact with the Ethiopian authorities”.

“Ethiopian Airlines have confirmed that there were seven British nationals among the dead, and my consular staff are working hard to establish the details,” he said.

“My condolences go out to the families and friends of those involved.”

A message from Ambassador @AMcPhailUK on the Ethiopian Airlines crash today #ET302 pic.twitter.com/qktxtqEvII

The aircraft was just a few months old, having taken its first flight at the end of October. Its last maintenance was on 4 February and it had flown just 1,200 hours.

It was one of 30 being delivered to the airline by Boeing.

It is the same type as the Lion Air plane which crashed into the sea off Indonesia last year killing all 189 on board.

In the wake of that disaster, Boeing issued a warning to airlines using its 737 MAX planes after a sensor failure was identified as a potential cause of the crash.

Ethiopian Airlines said in a statement that it “deeply regrets the fatal accident” and later published a photo of the chief executive standing at the crash site.

“He expresses his profound sympathy and condolences to the families and loved ones of passengers and crew who lost their lives in this tragic accident,” the company said in a social media post.

The airline, which changed its Twitter account cover photo to black following the disaster, has posted emergency numbers to call.

Ethiopia’s prime minister Abiy Ahmed has visited the crash site and expressed “his profound sadness at the loss of life and wishes healing to the friends and families of the bereaved,” his office said.

Kenya’s President Uhuru Kenyatta said: “My prayers go to all the families and associates of those on board.”

PM Abiy Ahmed visited ET 302 accident site this afternoon. He expresses his profound sadness at the loss of life and wishes healing to the friends and families of the bereaved. He provided direction to ensure full and timely investigation and communication of the cause.

Boeing said it was “deeply saddened” at the tragedy.

It said in a statement: “We extend our heartfelt sympathies to the families and loved ones of the passengers and crew on board and stand ready to support the Ethiopian Airlines team.

2A Boeing technical team will be travelling to the crash site to provide technical assistance under the direction of the Ethiopia Accident Investigation Bureau and US National Transportation Safety Board (NTSB).”

The NTSB has confirmed it is to send a team to assist the investigation. 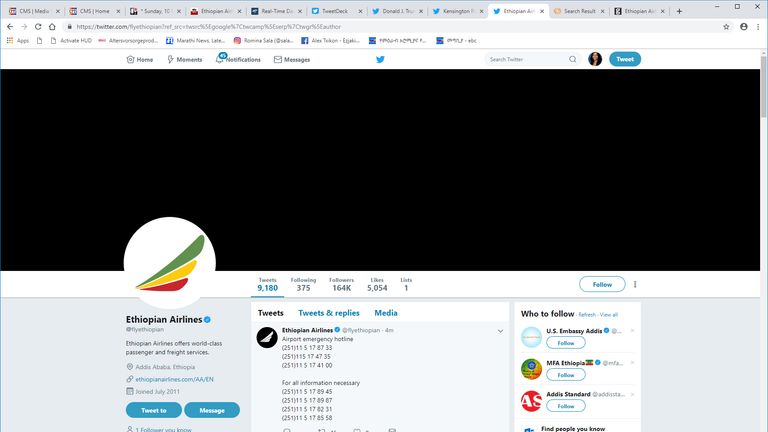 Ethiopian Airlines is one of the biggest carriers in Africa by fleet size.

It has said previously it expected to carry 10.6 million passengers last year.

The airline’s last major crash was in January 2010, when a flight from Beirut went down shortly after take-off.